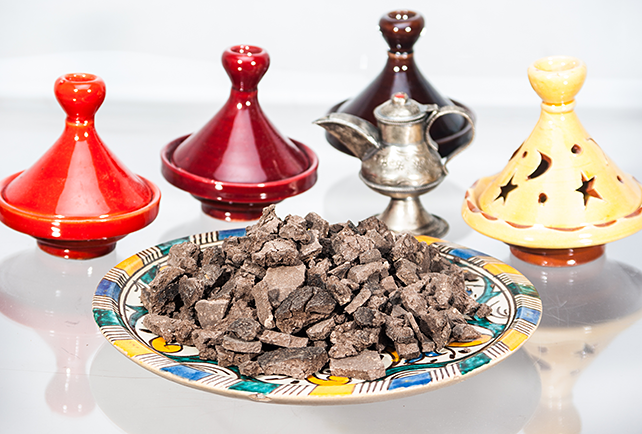 The name “Ghassoul” comes from the original toponymy Jebel Ghassoul (which means “the mountain of the washer” in Arabic) exploited in north Morocco.

Ghassoul is a lacustrine sedimentary formation rock of the Tertiary age.
Its geological origin comes from the alteration of unstable volcanic rocks.

The name of this rock comes from the original toponymy Jebel Ghassoul (which means “the mountain of the washer” in Arabic) exploited in north Morocco.

The Ghassoul clay “fields” extend over an area of almost 2,500 hectares and yield about 2900 tons of Ghassoul per year on average.
This quantity includes both national as well as international consumption.

Additionally to the fact that it has been used for body-care by women and men for thousands of years, the Ghassoul clay was also mentioned for its regenerative, protective and healing properties by Egyptian papyrus.

Similarly, the Greeks and the Romans not only used it to cure various issues and diseases, but also to cleanse their skin and preserve its natural luster.

Also, many European and Oriental scholars have addressed the amazing benefits of Ghassoul clay in medicinal notes.
In North Africa, Ghassoul has been used for generations as a traditional natural body and hair care solution and a beauty-product.

That said, it was, in Morocco for example, out of the question to use it directly in its raw state, hence the traditional ritual of the relatively secret preparation at home, which is jealously preserved through the generations and given further from mother to daughter.

And although there are slightly different (regional) preparation methods, the process itself is nothing of a quick “over night” preparation.

I’ll be posting soon about the exact ritual used for hundreds of years to prepare Ghassoul clay in our region.

The ritual consists mainly of maceration of natural gross Ghassoul stones using a kind of water-based “marinade” containing: several herbs, spices including orange blossom, chamomile, lavender, and myrtus (Myrtus communis) and many other ingredients, I’ll be talking about in a series of my blog posts, to take full advantage of the minerals it contains.

The resulting -kind of slurry- material is usually sieved in order to eliminate any impurities and dirt, decanted and kneaded by hand.

After that, the Ghassoul is sun-dried for around a week, while being aroused with the same marinade mentioned above, almost every hour.
This 100 % natural and organic product remains one of the most essential elements for any preparations for the Hammam session.

After that, the Ghassoul is sun-dried for around a week, while being aroused with the same marinade mentioned above, almost every hour.
This 100 % natural and organic product remains one of the most essential elements for any preparations for the Hammam session.

Since centuries, Moroccan women were practicing Hammam rituals as a traditional Spa consisting of beauty and body care: they wash, exfoliate, massage and moisturize the body, face and hair with traditional and All natural products, and whose astonishing benefits are now starting to be discovered in the West.

In fact, the Ghassoul clay is so valued that it is still also part of the offerings made to the bride by the groom’s family the day of the conclusion of the Moroccan marriage tradition.

Black soap, Argan oil, Kessa glove, and of course the Ghassoul … are nowadays considered to be “must-have” ingredients for a soft and warm atmosphere dedicated only to beauty and well-being.

Ghassoul clay by itself has become a basic need and a must for the beauty-care of all women, whether young or old, black or white, especially in the environmental pollution and the aggressive chemical contained in we’re living in.